Over the past few weeks, members of Central Library’s Edinburgh and Scottish Collection team have been busy trying to solve various family and local history queries that members of the public have been sending in by email.

Examples of the kind of questions asked have ranged from the straightforward to the devilishly tricky. So far, staff have fielded questions about whether the Library holds Edinburgh Electoral Rolls for the year 1845 and copies of the Evening News for 1959. (‘Yes’ was the answer to both questions). They’ve helped trace ancestors by finding birth, marriage and death certificates. And really got their thinking caps on when asked – what influenced 19th century emigrants to the US and Canada to choose one town over another in where they eventually settled! There have been some great questions about the local area too, from helping to date a school building in Leith, to finding resources on who was working as a pharmacist in Edinburgh in the early 1800s (and under what conditions). 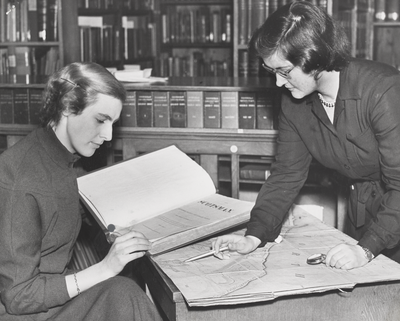 Answering enquiries in the Edinburgh Room, 1954. Image from Capital Collections.

With only having online resources to access currently and sadly, not the full library collection there are limits to what can be answered. However, if you do have your own local or family history query, please send it to central.edsc.library@edinburgh.gov.uk and they will do the best they can to help out.

Here are some links to great history and heritage resources that may begin or continue your own research journey and assist with enquiries also.

Before the glass facade of the multiplex cinema, the metal giraffes and the car boot sales, the Greenside area of Edinburgh was home to a population of 571 people living in 256 houses. Lying in the shadow of Calton Hill, the neighbourhood’s narrow streets and alleyways saw little sunshine. The area suffered from poor ventilation, over-crowding and poor sanitation. With the backing of the City’s Medical Officer of Health and the Chief Sanitory Inspector, Greenside was a priority area on the council’s programme of slum clearances. The Medical Officer had declared the area unfit for human habitation and the only satisfactory option would be to pull the tenements down.

In 1961, after demolition had started, a journalist wrote in the Edinburgh Evening News that the area was awaiting a ‘new era of usefulness’. The area would have to wait some time as a large multi-storey car park filled the gap left behind by the housing until the late 1990s when a multi-million pound development for a cinema and leisure complex was invisaged.

We’ve discovered within the Edinburgh and Scottish Collection, a fantastic collection of images of Greenside dating from the late 1950s before demolition work had begun. The photographs capture the dark and unsalubrious atmosphere of the narrow streets. They also however, show a different side of the neighbourhood. Many of the pictures are taken at Greenside Youth Club, possibly run by Greenside Parish Church, and show a strong community coming together to laugh and play and have fun.