On 16 May 2020, Carol Marr, librarian at Stockbridge Library and Tamsin Grainger, writer and Shiatsu practitioner hosted a Death Cafe. It was initially planned as a live event in the hall at the library, but due to the COVID-19 lockdown situation, it was held online.

We asked Tamsin to explain what a Death Cafe is and how the library fitted in.

Certain places and times of the day or year are more poignant than others when we are managing loss in our lives. Photograph by Tamsin Grainger

“What is a Death Cafe?
A Death Cafe is a place where people can come to talk about death. Group directed discussion is supported by a cafe environment and everyone is there for the same reason. There is an emphasis on listening and sharing, and the focus is that life is finite and we want to talk about that. We all have interests and concerns about bereavement, loss, grief or dying, especially at this time when we are dealing with the Coronavirus.

The Death Cafe movement started in 2011 when Jon Underwood and Sue Barsky Reid held their first in London. Inspired by Swiss-born Bernard Crettaz, it was to open up discussion about death and death-related subjects. Thousands are now held all over the world with today’s list on the Death Cafe website standing at 2262 in the UK alone.

It is important to note that Death Cafes come with very clear guidelines: they are

There is no set agenda, no objective or theme. It is not a grief support group nor a counselling session. There is no intention by the organisers to lead participants to any conclusions, buy any products or take any course of action. They are not religious, and are always ‘not for profit’ events.

A decade ago, not long after the death of his first wife Yvonne, Crettaz had come up with the idea of cafés mortels, informal gatherings where the sole topic of conversation was every living thing’s inevitable demise.

There is a history of Death Cafes in Edinburgh. Held at venues as diverse as Summerhall and the Love Crumbs cafe in West Port; organised by St Columba’s and the Marie Curie hospices; by individuals and through organisations such as the Just Festival (formerly the Festival of Spirituality and Peace) and Death on the Fringe.

The goal of the movement is to enable people to share their fears and hopes in a fashion which does not have to treat death as a taboo – that is, as something that needs to be addressed through euphemisms or abandoned in silence.

Maddie Denton, Reflections of the Self: Death Cafe and the Search for Personal Meaning (An exploration of death in modern society).

Tea and cakes
Without knowing how many would attend, research into former such occasions in Edinburgh lead us to believe that we might expect between 20-30 people who we would invite to sit around circular tables to promote equality of participation and exchange. Tea and cakes are an integral and vital part of a death cafe which aims to provide a convivial atmosphere for the open and honest discussion about death. It is over a cup of tea and a slice of cake that memories may be shared and thoughts exchanged in confidence. It can be easier to trust somebody with a cup of tea in their hand, and across the world sweet cakes are part of the tradition of a funeral tea. 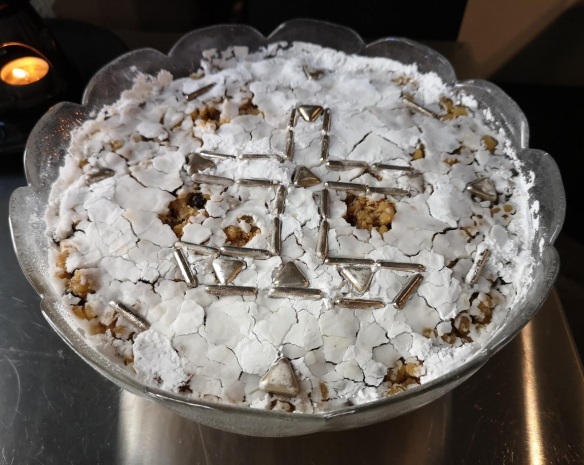 Coliva – Greek food for mourners. This beautiful creation is made for Greek Orthodox mourners to eat after the interment. (More details available on the Walking without a donkey website.)

If we had been able to meet in person, we would have made a display of related books: first-hand accounts of dying, spiritual and practical guides to grief, accounts of death rites and ritual around the world, and so on. The charity, Macmillan Cancer Support has support and information services in some Edinburgh Libraries and so, leaflets and other information would have been made available, together with referrals for support should any attendee need one.

How did it go?
We publicised our Death Cafe via Eventbrite, the libraries website, through Facebook, Instagram, Twitter and word of mouth. 15 places were offered for the meet-up which was held on a Zoom, online meeting forum and it was sold out. Ten people attended on the day – men and women of all ages – and although it was predicted that the live event would attract those local to Edinburgh, the ‘virtual’ Death Cafe drew folk from across the UK and Hungary.

We started together with an explanation of the event and its history, and then each of us introduced ourselves. The reasons for coming varied from a general interest in talking about death to specifics of end-of-life care. Some attendees deal with death-related topics in their work or study, and all were personally involved in planning or thinking about their own death. About half of the group had never been to a Death Cafe before.

After this, we divided into two smaller, private groups and everything was fully confidential. Discussion arose naturally. We looked at how tricky the current situation is: not being able to touch each other for consolation, and how hard it is to be unable to travel to visit dying relatives or attend funerals. We discussed what makes for a ‘good death’ and ‘advance decisions’ regarding preferred treatment when near death (ADRT). Some of us addressed the preparation of a Will, living funerals, and elective suicide.

While this latter is an important subject for discussion, a public Death Cafe is not the place for highly emotive, individual sharing on any subject, and the organisers would limit such (behaviour) at future events.

We are pleased to say that the online logistics were smooth, and immediate feedback indicated that those who attended found it refreshing to be able to discuss these topics openly and in a non-judgmental situation.

“I only wish it could have gone on a bit longer – another hour would probably do it. Is there any chance of a follow up session?”

“Saturday was a real success and I hope you do more of the same. Very revealing and thought provoking.”

Talking about death is not something that we all feel we can do with our families and friends, and yet it is something which is so often on our minds. Having a place to go where you can listen quietly or participate in a chat about bereavement, grief, dying, or even what will happen afterwards, is healthy. Hearing that others are concerned about the same things, knowing that you are not the only one who is nervous or fears death can be such a relief and can help manage the sort of worries that can only too easily spiral out of control and bring about mental health issues, such as depression, if they are not faced. Death Cafes are one way to tackle some of these issues in a trusting atmosphere, and the tea and cake are an added bonus! 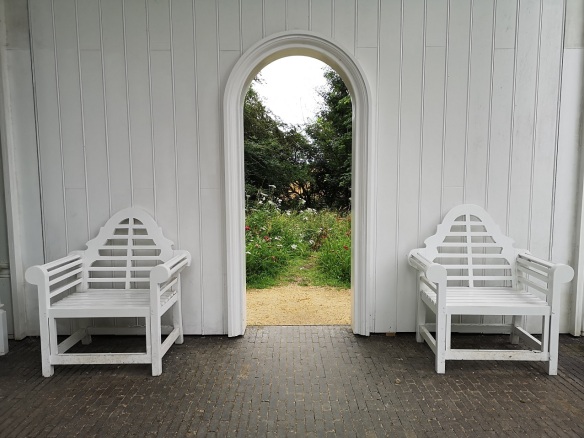 Death leaves a gap in our lives and it takes time to adjust to this. Photograph by Tamsin Grainger

About Tamsin
Like most of us, Tamsin has personally experienced grief and loss with the death of her father from cancer, miscarriages, divorce, leaving home, pets dying and numerous other episodes involving change which were sad and raised questions about mortality. She is the writer of Death and Loss in Shiatsu Practice, works at a local hospice, and teaches workshops in Edinburgh and abroad on the subject.