Continuing our History of the House series, we move a wee bit out of the city centre and travel south to Morningside. The house (rather a large one) is Falcon Hall. Built in 1780 by Edinburgh hosier and future Lord Provost, William Coulter. Originally called Morningside Lodge, it stood in what was then the Canaan Estate.

Coulter was born in Edinburgh in 1754 and had a house and shop at the head of Jackson’s Close on the Royal Mile. As well as serving as a Dean of Guild from 1806, he was also Lord Provost between 1808 and 1810, dying in office at the age of 56. He was by all accounts something of a character. When he died he was honoured with a public funeral. A look in our resource the British Newspaper Archive (BNA) features a page from the Scots Magazine from 1820 describing the funeral procession, with the 1st Regiment of Royal Volunteers leading the funeral procession “firing three vollies over the grave while the earth was putting on”.

Following Coulter’s death, the house was bought by Alexander Falconar. At one time a Chief Secretary to the Governor of Madras, Alexander settled with his family in Edinburgh in 1811, on his retirement from colonial service. In 1814, he bought Morningside Lodge, and nine acres of land surrounding it, and with the help of architect Thomas Hamilton, refurbished and enlarged it, renaming it Falcon Hall. Featuring elaborately styled wrought iron and stone piers, with large stone falcons, they were a magnificent sight to behold. Life-sized statues of Nelson and Wellington – both immensely popular figures of the era – flanked the main entrance to the house itself. 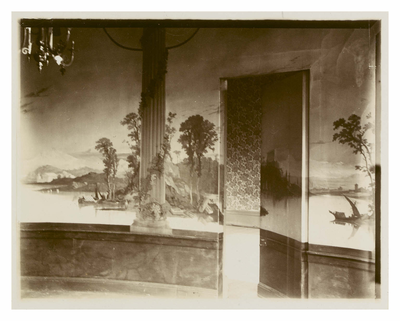 Searching Find My Past we can see that the first recorded Census taken on 6 June 1841, finds Alexander and his five daughters living in Falcon Hall, together with his son-in-law Henry Craigie, husband of the only married daughter, Jessie. Alexander’s wife, Elizabeth had died in 1831.

The census also records that Falcon Hall, had 1 male and 6 female servants, a conventional number at that time for a gentleman of Alexander Falconar’s wealth and social status. Alexander continued to live at Falcon Hall until his death on 10 December 1847.

As Morningside began to change and develop over the course of the 19th century, so did the fortunes of Falcon Hall. The gate pillars and falcons were removed in 1874 and repositioned on the slopes of Corstorphine Hill where they form the entrance to Edinburgh Zoo. The house remained in the Falconar family ownership until the death of his last surviving daughter, Margaret in 1887. It lay empty for a while before reappearing as a boarding school and ladies’ college.

The last inhabitant of Falcon Hall was Dr John George Bartholomew, a co-founder of the Royal Scottish Geographical Society and the owner of the map making company John Bartholomew & Son Limited. John enjoyed close acquaintance with many leading academics and travellers of the time, including Ernest Shackleton, Henry Stanley, and Cecil Rhodes, working with many of them to represent their work and discoveries in map form.

George lived in Falcon Hall with his family from 1899 to 1907 before it was demolished in 1909. When John Bartholomew & Co moved from premises in Dalkeith Road to an entirely new building in Duncan Street in 1911, the entire facade of Falcon Hall was transported from Morningside and re-erected in Duncan Street along with the entrance hall and staircase gallery with ornamental bronze balustrade which once formed part of the Morningside mansion house. Another feature is the domed roof which is ornamented with four great sculptured falcons. 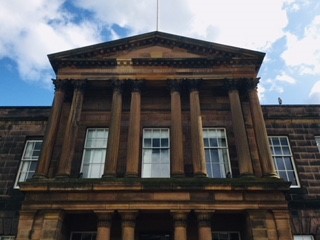 Facade of Falcon Hall used in the building of John Bartholomew and Co, Duncan Street

The name Falcon was subsequently given to the Morningside streets later developed on the property’s former site.

You can discover more about Duncan Street, home to the Bartholomew mapmaking firm from the National Library of Scotland’s Duncan Street Explorer website.

Are you interested in discovering the history of your home? The Edinburgh and Scottish Collection at Central Library has a vast collection of material which can help you.

5 thoughts on “History of the house: Falcon Hall”